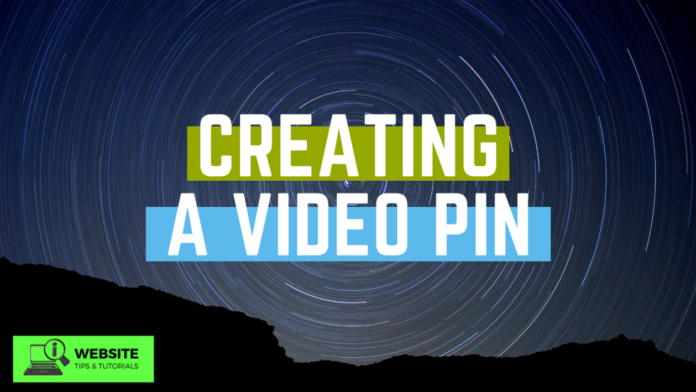 If you click on the links in this post, we may earn money from the companies mentioned in this post, at no extra cost to you. You can read the full disclaimer here.

If you use Pinterest, then you may have noticed that there are now video pins. Video pins are a wonderful new way to display your content on Pinterest. Pinterest has really been promoting video pins, so this is a good chance for you to get in at the beginning. This will in turn help your visibility and growth on Pinterest. Having video pins is also a great way to differentiate yourself from your competitors who may not have many video pins yet.

And the reason some people aren’t making video pins is that it can seem hard and overwhelming at first. Luckily, I can tell you that this is not the case! So I made this video showing you how you, too, can easily create your own video pins.

In this video tutorial, we use Wondershare Filmora as the video editor. We’ve used a lot of video editing software, and Filmora is definitely one of the easiest to use. It also allows you to easily adjust the size of the elements in your pin – and if that doesn’t make sense, don’t worry! Just follow along with this step-by-step guide to making Pinterest video pins here:

You can also see the transcript of the video here:

So we’re in Filmora. And the first thing I’m gonna do is go to File > Project. So I’m gonna change the settings. Unclick locking aspect ratio. First I’ll go with a width of 600, height of 1000, it’s up to you. 600 by 900 is standard on Pinterest. You can play around with whatever size you feel like works just for you.

Next, I’m going to go to File > Import Media Files, and I’ll import all the files I want to use. In this instance, I had already put them (the files) in the same folder. Usually I’m having to go to different folders, but whatever works for you – wherever your files are.

I will drag my video files down here and then I’ll move them around.

As you can see, it’s no longer that Pinterest size, so I’ll head on up to project settings and change it back to 600 by 1000.

Okay, so I’ll put these two video clips down here and I’ll switch the order. So, it’s just as easy as that with Filmora, with whatever order you want to do. You can just move it around, just click on it, and drag it however you like. If you want to move the clips 2 at a time, use your shift key to highlight two at a time, moving them around however you’d like.

And I’m gonna use Track 1 and Track 2, because I’ll have 2 videos going on at the same time.

Obviously, right now, the videos are a little bit too big to fit into our Pinterest size. So I’m gonna head on over to the right hand side where it says Transform. I’ll start with 35 (35% where it says Scale) and you could do whatever number works for you for your video clips, that sort of thing. And I’m gonna drag it on up (to the top of the video pin space).

And this one, I’ll do 50 (for 50% Scale). Because I already knew that would work for that one. You might have to play around.

And this one I’ll do 35 (percent scale). Well, I’m gonna push my cursor farther out so I can see what I’m working with, and I’ll drag the clip up to the top.

I already made a graphic. I used stencil – love stencil. I made it in Twitter post size. It doesn’t really matter what size you use because you can always shrink it or whatnot. And here, it’s a little bit too big, so I’ll come here (to the scale field under Transform on the right hand side)  and do 50, but it is too small. I’ll do 60 (percent scale).

I’m gonna – see how I’ve got it (the cursor) where the timeline is? I’m gonna make it a little bigger. Just so that it’s a little bit easier to work with.

And as you can see, the video sizes don’t quite all match up. But I can change that. Usually, if I’m not doing this for a video, I’ll spend some more time editing down. In this particular case, I chose clips that would be roughly the same length.

I’m gonna go here to my little scissors (icon), and that’s gonna split it. This part (the part we want to cut) is already highlighted, so I hit Delete. It’s gone.

So (with the graphic I want to make shorter) I’m just gonna drag it back here.

I’m gonna stop to go to the very beginning.

You know what? I messed that up. That’s okay; that’s good to see. So I see, whoops, I didn’t drag this (I didn’t drag those two clips all the way to the beginning). This (the beginning of the two clips) needs to be aligned here. That’s okay. I’m just gonna use control + Z to undo. And I’ve got my video clip back. So, you know, it’s pretty simple to use Filmora to do some of these things like undoing, clipping, that sort of thing. So, yeah. So, like I said, I accidentally left – not a big deal – some empty space right here. I highlight these two (clips) and drag them back.

I’ll edit this back. I’m going to do it a different way (than I did before). I’m just gonna grab or highlight that end and drag it back here so they’ll be the same size. I’ll do the same thing with this one.

I’ll hit stop again (to take me to the beginning of the video pin). Now I’m gonna play it through and see what my video pin looks like.

Okay. So pretty cool. I like it. Let’s say I decide I want to have the video clips in a different order. No big. I’ll just move it here. Make sure I’ve only highlighted that one. And I’ll move these around. You could just drag and drop to move stuff around.

The other thing you may have noticed while we were playing the video was the sound. I don’t want to have the volume on because you’re going to hear more than one audio track at once and Pinterest doesn’t always play the audio anyway, so it’s not really essential to the video.

So what I do is go up to where it says Transform and click on this little sound icon and drag that volume to zero, and I’ll do that for all of them (the clips).

Now I’ll play my video pin again and see how it looks.

Okay. So I’m happy with it on. Sometimes I make longer ones where there’s multiple videos on top and bottom. Sometimes there’s just one. It’s whatever you want to work with, whatever your project calls for. In this particular case, it is leading to blog entry that has a video tour, so I had a lot of videos to work with. If you don’t have any videos to work with but you feel like a video pin would help get Pinterest users’ attention when they’re on the app or desktop, you could consider using stock video as well.

At any rate, now I’m ready to save my video pin. So I’m going to go up to Export > Create Video. I’ll call it wilderness-lodge-video-pin. And I’ll hit Export. And it doesn’t take too long, just depends on the file… and it’s done! Find Target will take you to whatever folder it’s in, and Close will obviously close.

Well, thank you for listening. I hope you got some tips and information you can use so you can make video pins for your own Pinterest account. Thank you.

Hopefully, this will help you create video pins!

You can see the video pin we made in the video here on Pinterest – feel free to save to your own account for reference!

How to Start a Science Podcast

How to Start an Online Comic Book Store

As an Amazon Associate I earn from qualifying purchases.

How to Start a Science Podcast

Resize Multiple Images at Once: Free Image Resizer for Windows

A2 Hosting Help: How to Point Domain to Host A2